Have you ever wondered what make monitor lizards so unique among reptiles?

Well, you might find part of the answer here

Within an international collaboration, we have sequenced the genome of the Komodo dragon (Varanus komodoensis), the largest extant monitor lizard, and present a high resolution de novo chromosome-assigned genome assembly for V. komodoensis.

The comparison of Komodo dragon’s genome with those of related species highlighted positive selection in pathways related to muscle energy metabolism, cardiovascular homeostasis, and thrombosis.

Our results, provide genetic underpinnings of the unique Komodo sensory, cardiovascular, and muscular systems, and suggest that selective pressure altered thrombosis genes to help Komodo dragons evade the anticoagulant effects of their own saliva.

For what concern sex chromosomes, our main interest, in this project we were able to detail the content of Z chromosome of Komodo dragon.
All scaffolds assigned to Z chromosome were homologous to A. carolinensis chromosome 18 (ACA18) and to chicken chromosome 28 (GGA28), as confirmed in our previous work (full text here) by comparison of gene copy number variation between sexes.
The same syntenic blocks was already known to be involved in different in vertebrate sex determination. In particular, the regions of sex chromosomes that are shared by varanids and other Anguimorphan lizard contain the well-known amh (anti-Müllerian hormone) gene, which plays a crucial role in the differentiation of testis.

Sex determination in varanids, beaded lizards and alligator lizards have never been so clear! Check our last paper on Molecular Biology and Evolution here!

Sex chromosomes in Anguimorpha were previously reported only in a few species, by cytogenetics, with no assessment of their homology.

In this work, we uncovered Z-chromosome specific genes in varanids, homologous to GGA28, from their transcriptomes, and we compared the differences in gene copy numbers between sexes across the anguimorphan lizards and outgroups.

We conclude that differentiated sex chromosomes were already present in the common ancestor of Anguimorpha living in the early Cretaceous or even in the Jurassic Period, 115-180 million years ago, placing anguimorphan sex chromosomes among the oldest known in vertebrates!

And they are not only old, but also very stable!
Hypothetically, if mosasaurus, as some phylogenetic study suggest, belonged to Anguimorpha, they would have the same sex chromosomes.

Furthermore, the analysis of transcriptomes of Komodo dragon (Varanus komodoensis) showed that the expression levels of genes linked to anguimorphan sex chromosomes are not balanced between sexes, highlighting a lack of dosage compensation.

Our new study on turtles it’s finally out!!

In our exploration of the fantastic world of reptiles sex determination, this time we focused on turtles!

We cytogenetically studied Geoemyda spengleri and Geoemyda japonica and re-examined Pangshura smithii, all members of the family Geoemydidae. This family has always been considered exceptional, because both male and female heterogamety, as well as environmental sex determination, have been reported.

In this study, we found out that none of the species analyzed showed differentiated sex chromosomes, neither P. smithii in which a ZZ/ZW
system was described more than 40 years ago. This finding has never been re-examined and was cited in all reviews of sex determination in reptiles!

We then show that the identification of sex chromosomes in the original report was based on the erroneous pairing of chromosomes in the karyogram, causing over decades an error cascade regarding the inferences derived from the putative existence of female heterogamety in geoemydid turtles.

Check out the full text here!

The first report about heteromorphic ZZ/ZW sex chromosomes in a boid snake was  regarded as ambiguous and recent molecular studies revealed that differentiated sex chromosomes are indeed shared among all families of caenophidian snakes, but that boas and pythons evolved likely independently male heterogamety (XX/XY sex chromosomes). 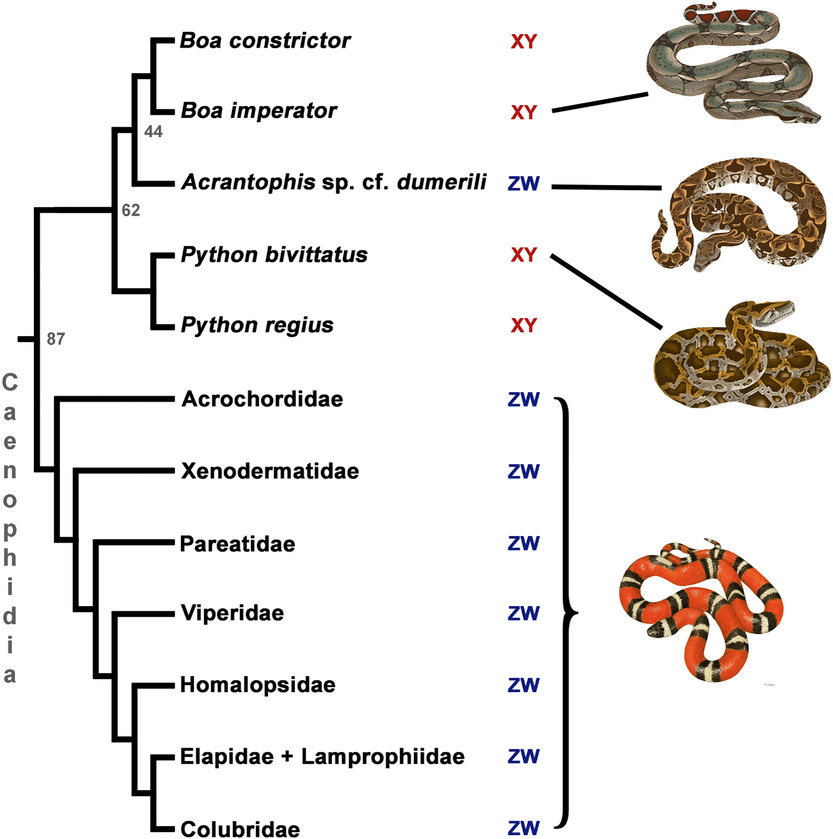 ZW, XY, and yet ZW: Sex chromosome evolution in snakes even more complicated

You can find the complete text here

Even if it is well known that the advanced snakes (Caenophidia) possess highly conserved female heterogamety across all families, any knowledge on the gene/s and the molecular mechanism controlling sex determination is still lacking. In this paper we report a case of spontaneous triploidy in a male of the twin-spotted ratsnake (Elaphe bimaculata), with ZZW sex chromosomes. We speculate that as both ZZ and ZZW individuals develop male gonads, the ratio between the number of Z chromosomes and autosomes, and not the presence of the W chromosome in the genome, drives sex determination in the advanced snakes. 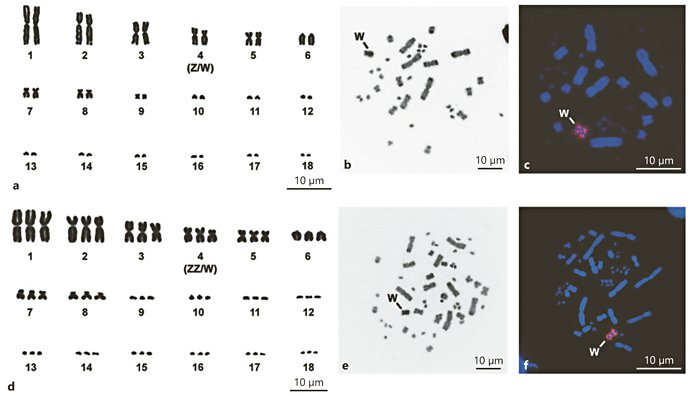 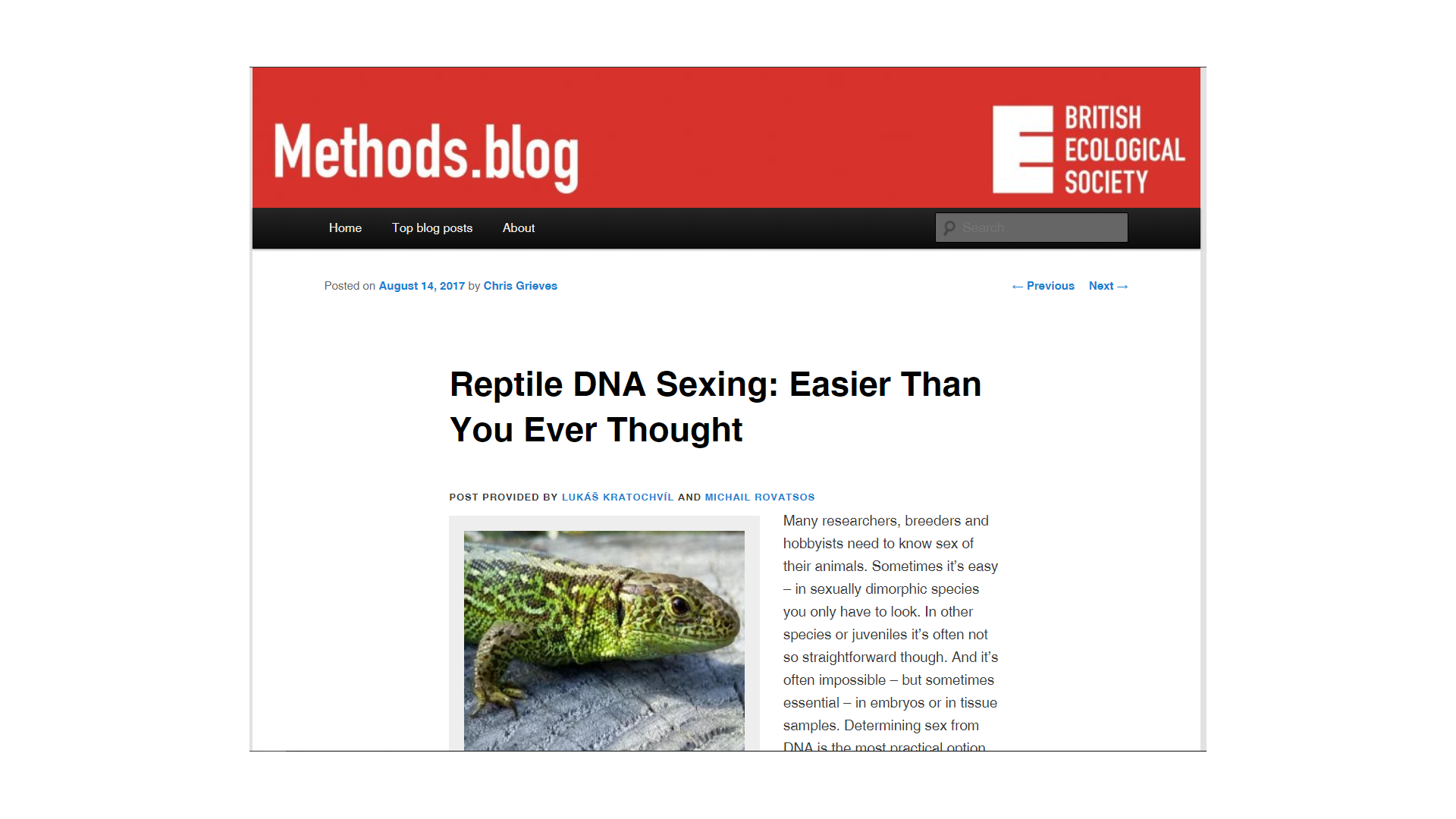 Sex chromosomes in iguanas. Deborah Charlesworth spoke about us!